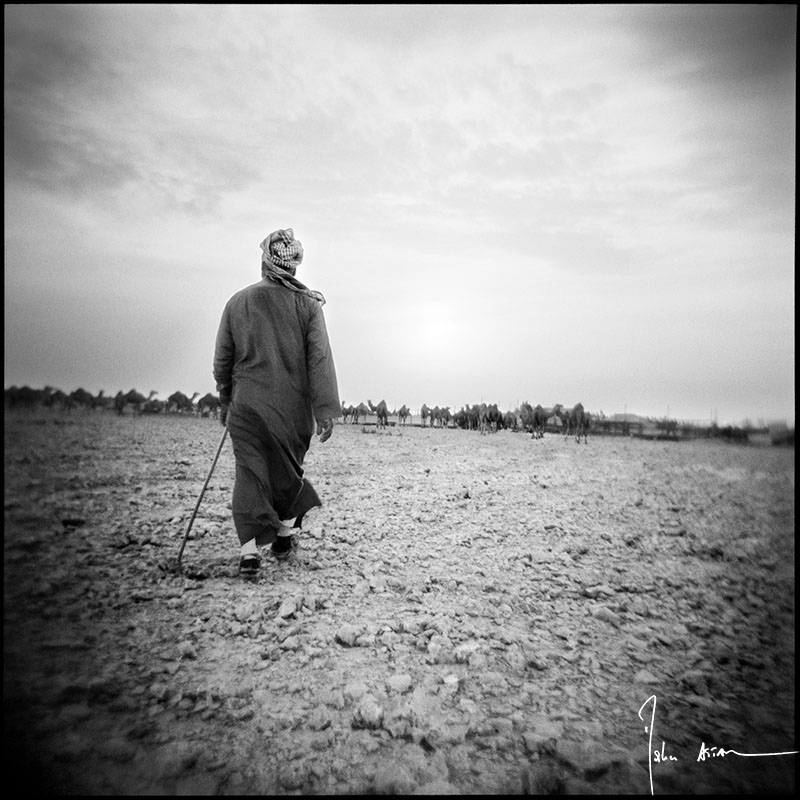 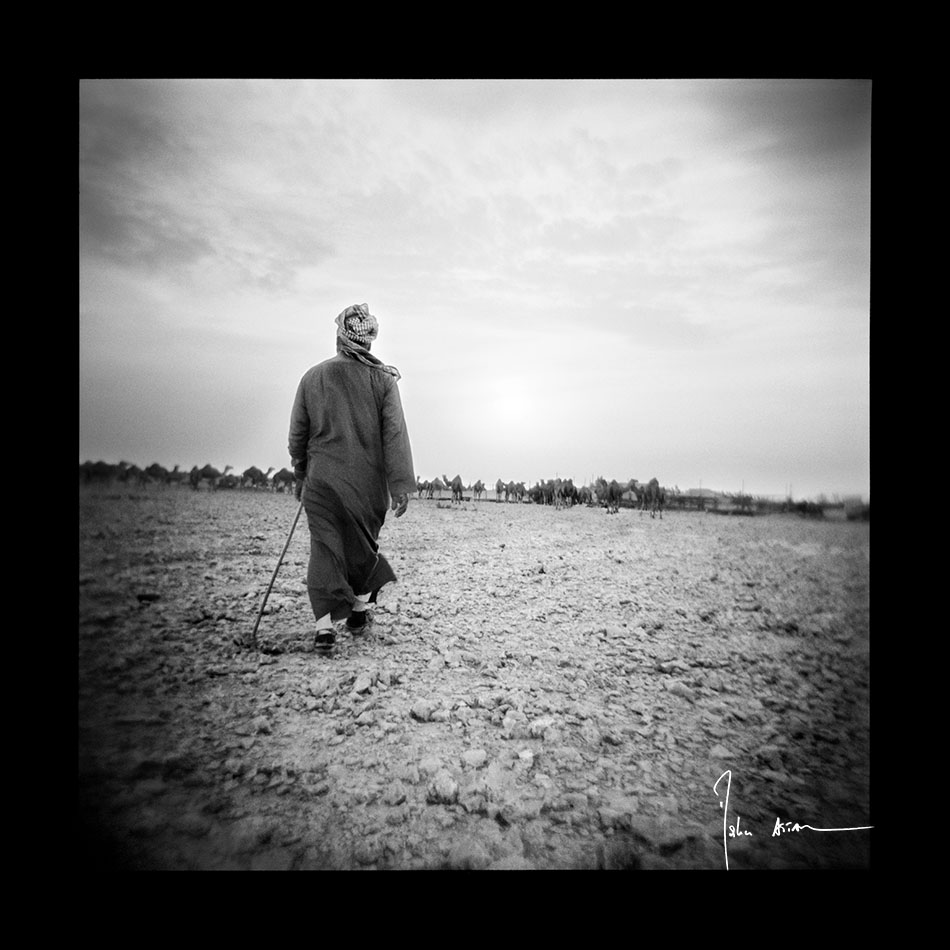 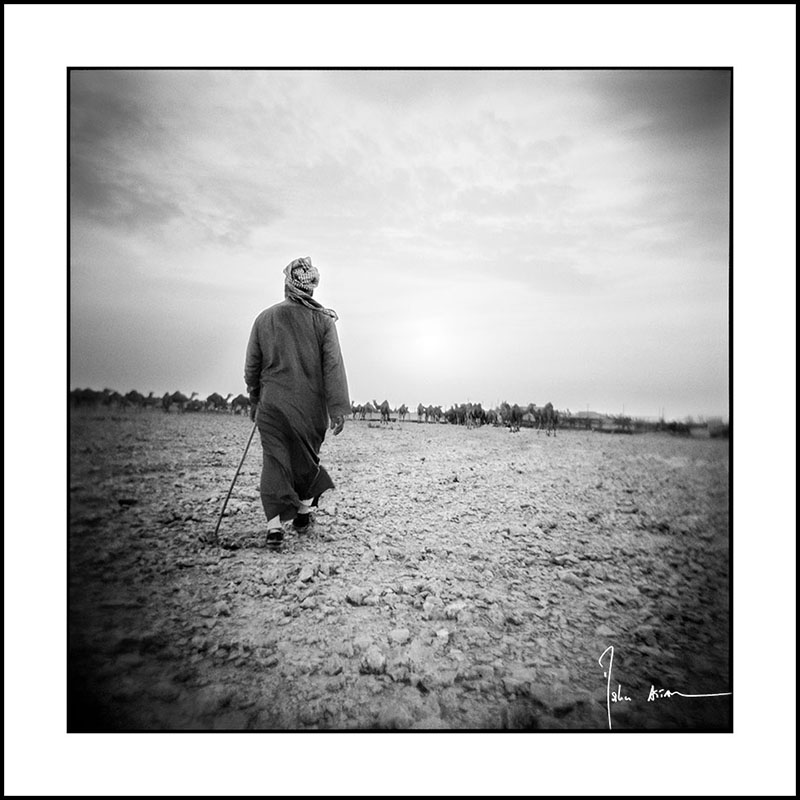 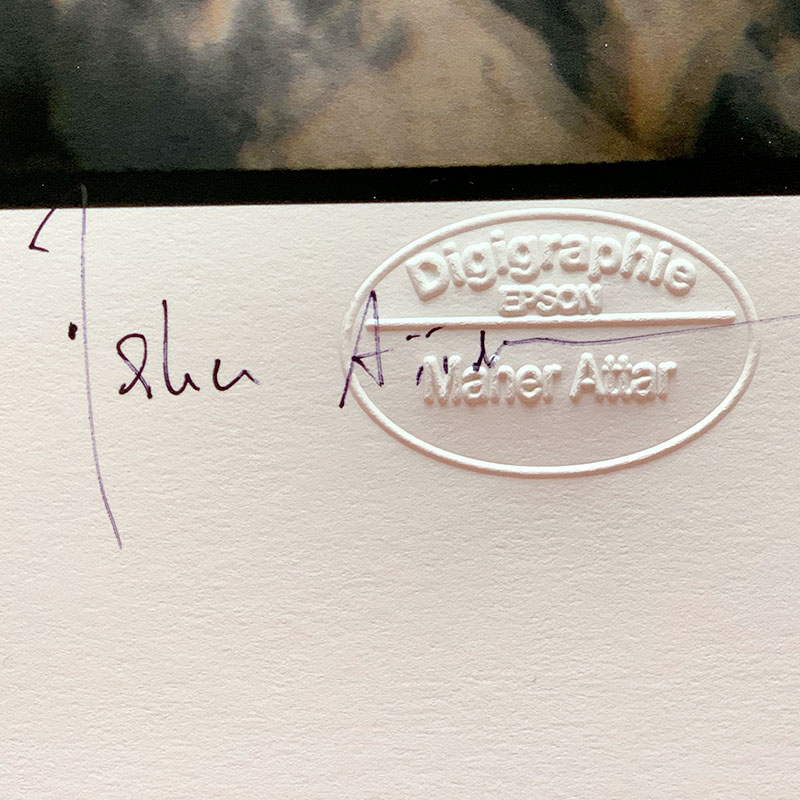 The country is buzzing, travelling towards the future at a dizzying pace. With cities being the beating heart of nations. The future is already in the present, while at the same time the past is merely clinging on. My work on Le temps suspendu questions about these lost tracks and conceptualizes memorial sites. My idea is to capture the memory of something doomed to disappear or which has never really existed, namely the memory of a country with very powerful traditions but which, strangely, struggles to preserve its past, preferring instead to reconstruct a past out of elements of the new. I therefore went in search of this lost time with a feeling of emptiness and abandonment. I call upon memory and imagination through the romantic accents of the landscape. Ruins, stones, fragments, the desert, water, timeless characters. A certain melancholy is expressed in my images, as if I wanted to monumentalize these subjects.
Digigraphie® print, limited edition, signed and stamped by the author.
You can buy this piece alone or as part of a set. Images can be framed with option of Black or white matting.
=============================================================================
The use of a Lomography camera determined a major part of the project’s aesthetic. “Lomography” is a fashionable movement based on the concept of constructing new cameras – using silver print films – from old, cheap models from the ex-Soviet Bloc. Here, I take the opposite approach to the supra-perfection of digital photography. The images are raw, poorly framed, out-of-focus, grainy and have a black circle in the corner. The camera has very few settings, but leaves substantial room for manoeuvre in terms of exposure times and advancing the film, done entirely manually, making it possible to explore areas beyond the range of basic contemporary cameras … I use deteriorated film, the chemical make-up of which is altered. Every print developed has a surprise in store. Perfection gives way to reality, to error. Emotion takes precedence over the ordered world. I regard the images produced as in some way archaeological, reminiscent of those of the earliest photographs, for example daguerreotypes. But it is not in the marketing slogan, “capturing life as it is” that I find my inspiration. On the contrary, obeying traditional photographic rules such as the composition and balance of the image is, for me essential in terms of achieving a truly creative work. »

Maher Attar, an award-winning photographer with his war-time photography and lifestyle portrait of world leaders and celebrities. His clients include magazines, celebrities and non-profit organizations. Maher held a number of positions as a photographer, communications advisor and Director of image bank and organizing programs designed for NGOs to teach children from Asian countries the techniques of photography. Maher has been recognized regionally and internationally for his accomplishments in the world of photography. Lebanon honored him in the exhibition “Born in Lebanon” alongside the world-renowned singer Fayrouz and the internationally acclaimed fashion designer Elie Saab. The United Nations Environment Programme, exhibited his work at the Espace Pierre Cardin in Paris entitled, “Auprès de mon Arbre”, featuring nine large-format photographs celebrating nature, water and life. In addition, the United Nations Photo Library has archived and used Maher’s moving picture of the French UN Peacekeeper during an exchange of fire in south Lebanon in 1986. Maher was selected by the MEP (European House of Photography) and IMA (the Arab World Institute) to exhibit his latest Lomography work at the First Photography Biennale of the Contemporary Arab World in Paris from November 2015 to January 2016. To Fuel his passion for art, Maher has had the idea of creating a fine art book that toiled in his head for more than ten years. However, it was not until he returned to his homeland, Lebanon, that “Be Creative” came to life. As an artist and a professional, Maher tells true stories of artists, by an artist. Maher has published more than 10 books and currently working on a historical photo project titled ‘BERYTUS ' ' A Glorified City’.